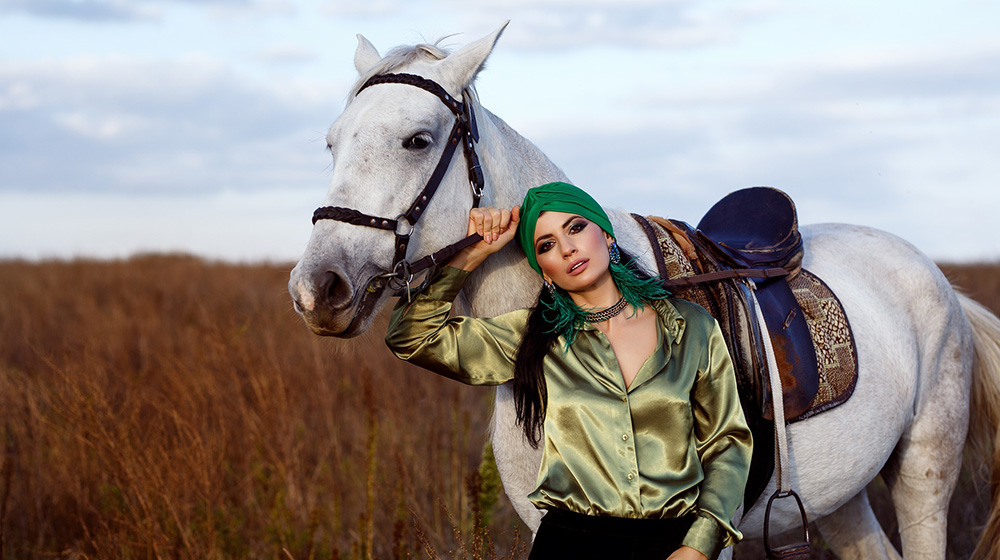 Changes in horse fashion throughout history

Horses and fashion have been connected for a very long time. Horses’ clothes are considered stylish nowadays and likewise equestrianism has an effect on fashion. For instance, the purpose of the single vent with a split on western suits is to protect the rider’s back from rain. The equestrian world has influenced general fashion to a large extent, but where does this all come from?

Equestrian apparel is comfortable and composed of practical clothes. Not only riding outfits need to be comfortable for riders, but also they need to protect against bad weather or extreme heat. The boots protect riders from trees or branches and the hat is essential in case of falling down. We will take a glance at different trends in equestrian fashion since the 1700s.

The 1700s: the fancy horse fashion

Women would ride their horses wearing fancy dresses or skirts and the top half of women’s clothes were similar to the one men wore. They would both wear a jacket, meaning the typical riding clothing was masculine on the top and feminine on the bottom.

Women would have special dressmakers making their dresses. Not only they looked very fancy and filled with bright colours, but also they worked as “safety-skirts”. This meant in the case of falling off, they would not get caught on the saddle.

Moreover, there was a huge influence of military clothes on horse fashion. This resulted in rich ornaments in braids in gold or silver on the breast.

During the 1800s equestrian fashion took a huge turn. Riding became very common among the upper-middle class, equestrian clothes were less elaborate than before. Also, now they were mostly black or dark colours and pants were introduced for women to ride for the first time but these were worn under the skirt.

During the Victorian age in Britain: “A plainness (…) is to be preferred before any outward show. Ribbons, and coloured veils, and yellow gloves, and showy flowers are alike objectionable.” People wearing colourful clothes were considered to have an “inferior taste” in fashion, so it was avoided at all costs.

Also, later in this century American cowboys would roam around the Wild West. In this case, horse riding clothes even made it later on to the cinema: the cowboy hat, big boots, chaps, a lasso, spurs… All of these provided protection against bushes or barbed wire and created a classic look and quite different to the style in Europe.

The use of horses changed with industrialization and the transport revolution that introduced trains and cars. Horse riding became linked to relaxation and equestrian sports. With female emancipation, in the 1900s women started riding without skirts.

Early in the century the jodhpurs became trendy. These were riding trousers characterized by having wide hips and tight legs. They originated in Jodhpur, India back in the 13th century, but they became extremely popular when they were introduced in the United Kingdom in the late 1800s.

Production of fabrics and clothes were produced in mass. New materials were introduced: cotton-lycra, gore-tex, oilskin… However, style remained similar for a long time even if different disciplines had different dress codes. Usually riders would now wear a helmet, jodhpurs, black boots and a riding jacket.

Moreover, certified protective helmets have been around since the early 1990s. Since, and early in the 2000s we started seeing more variety in the appearance of certified helmets. Now, it is very hard seeing dressage riders wearing hunt caps instead of certified helmets. This is a change in equestrian style towards safety.