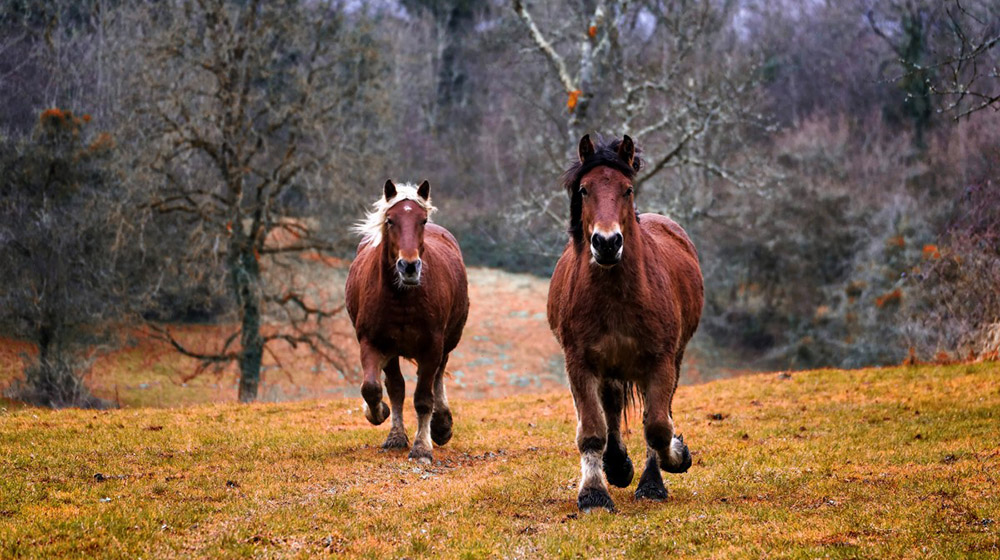 Back to when domesticated horses changed human history

With the domestication of horses, the course of human history drifted massively. Scientists have been trying for years to figure out when and where this event happened. However, an enlightening new study using DNA analysis suggests horses were first domesticated around 4,200 years ago in the steppes of the Black Sea region.

Horse domestication had remained a mystery throughout the years as scientists tried to discover its birth. Although it was first believed the regions of Botai (Central Asia), Iberia or Anatolia could have been the place where horse domestication started, a group of researchers have dismantled it.

Scientists have found it incredibly hard to locate where and when horse domestication occurred, as this is more subtle and less obvious than with other animals like cattle. Researchers have had to work with indirect evidence like tooth damage that suggest wearing bridles or horse symbolism across several cultures.

The study published in the journal Nature was led by Ludovic Orlando, research director at the French National Center for Anthropobiology & Genomics of Toulouse. The international team collected genomes from 273 ancient horse remains across Europe and Asia, comparing them to the DNA of modern horses. William Taylor, study coauthor and assistant professor and curator of archaeology at the University of Colorado Museum of Natural History said:

“Tracing human activity in the archaeological record is a difficult task, and even more difficult when it comes to reconstructing ancient relationships with horses, from which we often have only fragmented material, like horse bones, available to study"

Taking steps towards a better horse

During the Bronze Age in Europe and Asia, about 5,000 and 4,200 years ago, it is likely people were domesticating horses. Archaeological and historical records suggest that very quickly, around 4,200 years ago, horse populations shot up across Eurasia.

The mystery remained as it was unknown whether climate change was expanding the grassland and giving horses more habitat or people across the world were breeding herds at the same time.

During the last decade, technology has tested ancient DNA from materials as bones and hair to investigate these broad questions. Orlando and the international team of bone collectors gathered enough material to test 273 individual genomes from horse remains.

After comparing the overall composition of these genomes across time and space, they mapped out where and when the horses evolved.

This study provides genetic evidence from horses that lived in the relevant time frame and region, said Vera Warmuth, biologist at Ludwig-Maximillans University of Munich.

You will like: Learn how to differentiate the different horse coat colours and patterns

Previously, it was believed the original cradle for domesticated horses was the Botai site, in northern Kazakhstan, as it provided the oldest evidence of these animals. However, DNA has shown that these horses lived 5,500 years ago, and could not be traced to modern domestic horses.

Other areas like Siberia, the Iberian Peninsula or Anatolia have also been debunked. As researchers broadened the search and studied ancient DNA from horses that lived between 50,000 BC and 200 BC, and then compared this to modern domestic horse DNA, the team was able to pinpoint the time and location.

“Horses were an order of magnitude faster than many of the transport systems of prehistoric Eurasia, allowing people to travel, communicate, trade and raid across distances that would have previously been unthinkable.” -Wiliam Taylor

Why was horse domestication so crucial?

According to Dr. Sandra Olsen, zooarchaeologist and curator at the Carnegie Museum of Natural History, horses have probably been the most important animal to be domesticated by humans. At first, humans depended on horses for food, and horsemeat was an important part of the Eurasian Steppes diet.

However, when people started using horses in other ways, they provided the first means of fast travel for long distance. This sped up migration, trade and communication between cultures, helping languages spread around the world.

Also, they helped people work, from ploughing fields to hauling goods. Eventually, horses were also used in warfare. Cavalries provided armies that were much more powerful than those on foot, and this led to several empires building in human society of the ancient world.

“The reason why we are so much interested in horses is that they can probably be considered as one of the animals that most impacted human history. This tight relationship that we have developed with this animal lasted until the early 20th century, a time when the motor engine took over transportation." -Ludovic Orlando