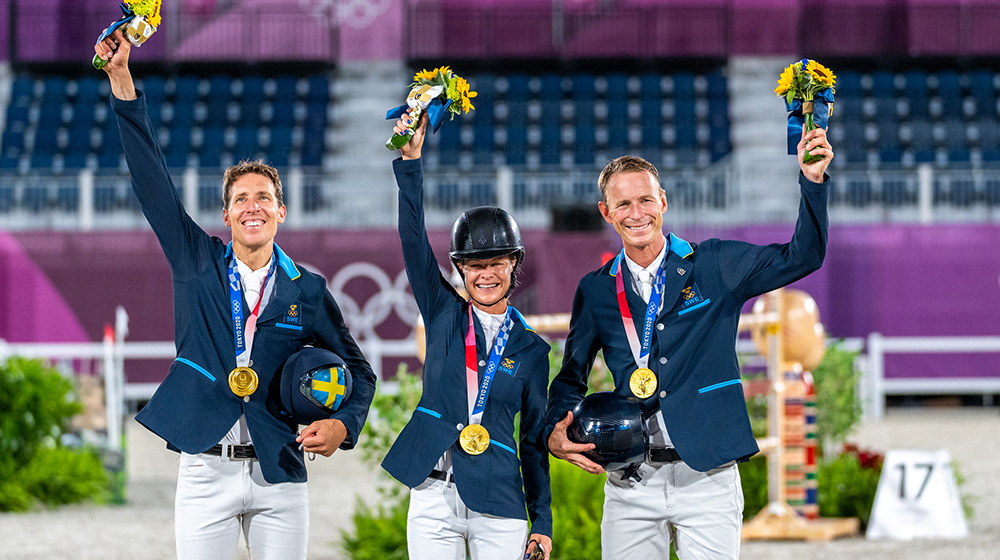 The Swedes have beat the USA in the Tokyo Olympic Games after the exciting jumpoff. The bronze medal has gone to Belgium.

Peder Fredricson and All In, Henrik von Eckermann and King Edward and Malin Baryard-Johansson with Indiana have won their first Olympic gold in the Tokyo 2020 Olympic Games. The USA saw superb performances from Laura Kraut, Jessica Springsteen and Mclain Ward.

Ten Jumping teams made it through to the jumpoff that would decide the medals of the competition. The Team Jumping final course was designed by Santiago Varela Ullastres in the Baji Koen Equestrian Park, and it was the toughest one the horse and rider pairs have seen so far.

Double and triple elements with water trays beneath challenged the riders on the course. Each team had only three riders, instead of four, so there were no opportunities to miss.

France started the first two rounds in front, leading by just 2 points. Sweden, the USA and Belgium were right behind holding 4 points each. The Netherlands were on 9, Germany on 12, Brazil 16, Switzerland and Great Britain 24 and Argentina 27.

Switzerland and Great Britain's results were shocking as both teams were strong medal contenders at the start of the games. However, Martin Fuchs earned 8 points, Bryan Balsinger and Holly Smith 16 points and Harry Charles 8 points.

As Ben Maher of Great Britain had to withdraw and world number three and Olympic gold medalist Steve Guerdat of Switzerland picked up 4 points, they were far from the podium. Daniel Deusser of Germany and his young mare Killer Queen had a rail down and a refusal, so he decided to retire.

It was down to the five final teams, and Maikel van der Vleuten, individual bronze medalist, had two fences down for 8 points, leaving the Netherlands on 17 points.

France stood a chance for gold

Gregory Wathelet of Belgium was next and riding his stallion, Nevado S. Picking, he picked up 8 points, leaving Team Belgium with 12 overall. The USA were up next with multiple Olympic medalist McLain Ward who, with Contagious fresh, saw 4 points added to the American score for a total of 8.

Swedish Peder Fredricson with All in had an incredible round until the last fence. However, the Swedes remained tied with the USA on 8 points. It was now up to France to win the Olympic gold or not.

Penelope Leprevost and Vancouver de Lanlore were the last riders to go. They needed only one rail down, as two would mean the USA and Sweden would go for a jump off for gold. They struggled with a double and it followed a refusal, meaning the pair was eliminated. Belgium had guaranteed the bronze medal and now it was up to Sweden and the USA.

The Olympic jump off

The new shortened course with a 270-degree turn after a double combination and 44 seconds allowed would prove to be tricky for both teams. Up first, Laura Kraut and Baloutinue turned in a clear ride in 41.33 seconds. Henrik von Eckermann also went clear crossing in 42.00 seconds.

In her Olympic debut, Jessica Springsteen and Don Juan van de Donkhoeve also went clear, finishing in 42.95 seconds. Five-time Olympian Malin Bayard-Johnsson did it a bit better, finishing in 41.89 seconds and leaving Sweden on a total of 83.89 seconds. The US had 84.28 seconds total.